Fans of the Toronto Argos and the Hamilton Ti Cats might have something to say about that! They put their friendly rivalry to good work in a recent Labour Day Rematch fund raising event. With a tailgate party to remember, one Ti Cat fan said farewell to one of his great loves. Moreover, an Argos charity made great gains.

In their September 1, 2015 press release, the Toronto Argos told a bit of the back story. 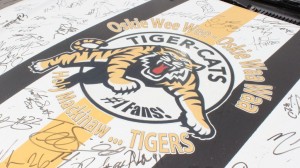 “Tiger-Cats fan Terry Cabral has spent the last four years collecting signatures of Ticats players and coaches on (his 1990 Toyota Corolla), which has been turned into a mobile shrine to the Black and Gold. Cabral adorned the car with a Tiger-Cats logo on the hood, along with black and gold racing stripes, a miniature CFL field on the trunk, and Hamilton’s famous ‘Eat ‘em Raw’ slogan.

Cabral posted the car for sale on Kijiji in order to raise funds for the Bob Kemp Hospice in Hamilton, and the Argonauts agreed to purchase the car for donation.” 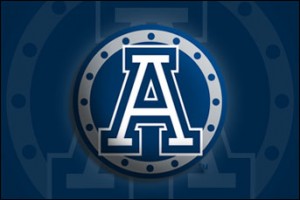 Upon purchase of the Toyota (from a reluctant Mr. Cabral), the Toronto Argos made plans for an epic tailgate party! The fundraiser was unique. For a $5.00 donation to the Canadian Safe School Network, fans had the opportunity to paint the car “Double Blue.” Everyone had the chance to claim it for their home team!

That little Toyota ended up making a big impact for charity! Mr. 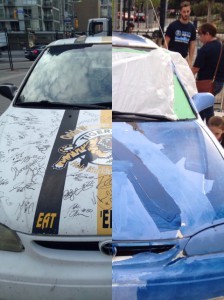 Cabral’s original sale of the vehicle benefited his own hospice charity. Furthermore, the event at the Labour Day Rematch in Toronto brought in over $200.00 to the CSSN from paint-wielding fans. With the make-over complete, the Corolla was picked up for recycling by our Donate a Car Canada program. The result? An additional $100.00 to the Canada Safe School Network!

To all the fans and and donors alike, here’s to generous cooperation on and off the field as we work together to keep Canada giving generously!

Donate your unused or unwanted car, truck, van, or SUV to the charity you love! We’re here to keep the wheels turning smooth and easy. The donation form will take less than 10 minutes, and your tow is always free!

You can choose any charity in Canada as the recipient of your gift. We have been serving hundreds of charities for over a decade. If you can’t find the cause you love on our site, let us know! We’ll get them set up to receive your gift. Donate today!