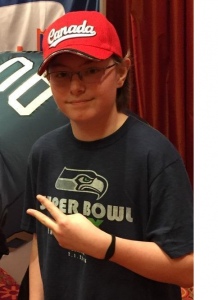 What does Bowflex have to do with Shane? Just four years ago, Shane was a typical rough’n’tumble boy. In school, he was good in math but even better in gym class. He was strong and agile with energy to burn. Shane was in excellent physical condition. He effortlessly played a variety of sports, particularly flag football. Like most kids, he didn’t appreciate what his body was capable of, until leukemia took it all away.

Shane was diagnosed with Acute Lymphoblastic Leukemia when he was 10-years-old. ALL is a cancer of the blood. Symptoms can include fever, weight loss, pain and breathlessness, but it wasn’t the cancer that devastated Shane’s body. It was the aggressive cancer treatments that robbed him of his strength and vitality.

Today, after three and a half years of chemotherapy, Shane is 14 and cancer-

free. He has been approved for a wish from The Children’s Wish Foundation, and he’s made it pretty clear that his heartfelt wish is to get his body back into shape. Shane’s wish is for a Bowflex Universal Gym so that he can not only build up his physique, but his confidence and self-esteem which also took a beating during his illness.

Shane’s future goal is to use his math skills to become an engineer. But in the meantime, he has big plans to get into shape and views a Bowflex Universal Gym as the fastest way to get there. Once he’s gained back some muscle strength and stamina, Shane says he’s going to try out for every single sport out there!
There is a chance that the leukemia could return and Shane will be ready for it. All he’ll need to do is look at his Bowflex and know that cancer might send him to the sidelines for a while, but ultimately, he has the strength and support he needs to get back in the game.

A Happy Update: Shane’s Wish Has Been Fulfilled 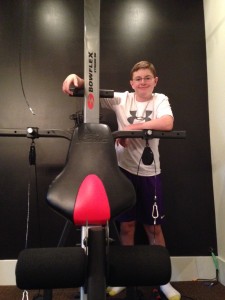 Reprinted by permission from the Children’s Wish Foundation