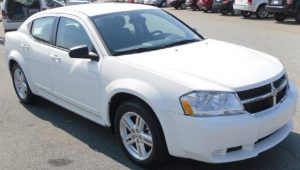 In fact, the Avenger has had the kid’s back through seasons and jobs and friendships and more jobs. Our three boys purchased the car together when their first car (a plum-purple Ford Escort, long since donated here at Donate a Car) fell apart piece by piece. That one was held together with bungee chords and teenage hope by its end. The Dodge took the Escort’s place, and our youngest eventually took sole ownership.

That car got him safely to 4:30 am lifeguarding shifts at pools all over town. It’s seen him through promotions, life lessons, and meeting big life goals.

And then, one wee-hours-of-the-morning fog-laden drive, the boy turned that poor ol’ car straight into a puddle. A deep puddle. A spray water completely over the roof puddle on a freezing day. The Avenger stalwartly drove him to work…and then sat in the subzero temps for a 10 hour shift…and then settled into an unresponsive car coma.

We thought the Dodge was done. How could it come back from such a soaking? Surely the electronics would be fried? But the car wasn’t done at all. The Kid (known for his keen ability to save money, and his vigorous determination not to spend any) wasn’t about to give up on it. The winter months had our son tapping into depths of faith he didn’t know he had, “Please, please, please start this time…” and off the Avenger would roar. Or not. Depending on its mood. The car was feeling the effects of a good puddle drubbing (or so we thought), and it was hurting.

Drown Dodge gets its revenge

It didn’t take long for The Kid to invest in an AMA membership with a hearty tow package. That got him through last year’s endless winter, and by summertime the car seemed to have sorted itself out. No more refusals to start in awkward places at awkward times. We all thought maybe we’d overestimated the flooding and that the car was going to be fine after all.

And then the temperature dropped below zero. Early in October (I know! How we suffer.). And the first text came, “So, Mom? The Dodge won’t start. I’m calling AMA.” That was almost a month ago. And that cranky Avenger has really been digging in its wheels. It strands The Kid all over town (he’s now doing a food delivery job part-time, on top of his supervisory gig at the pools), in all kinds of awkward places.

It spent a week at Canadian Tire. They eventually threw up their arms in despair saying, “We can’t find anything wrong with this car. No charge beyond the initial inspection because we can’t fix it.”

It spent a few nights at the Dodge dealer. They should have thrown their arms up in despair, but instead they replaced the battery and told The Kid it was fixed.

And he thought it was. It started up perfectly. For a week. And then it started fussin’ again…leaving him stranded during yet another food delivery shift.

What the Avenger has been trying to tell us all along

Back to Dodge the car was towed. My son, with now-permanent wrinkles of annoyance etched into his 20-year-old brow, was being challenged by all of the rest of us to just let the poor thing go already.

And then the dealership called. They think they’ve found the totally-not-flood-or-battery-related problem (some of you are ahead of us on this; we were completely clueless)…

‘Ever heard of a “starter interrupter”? Yeah, we hadn’t either. This little gadget is used by dealerships/lenders to ensure they have some control over the vehicles they’re financing. Not making your payment on time? No problem! Your friendly neighborhood dealership can click a button and ensure you don’t go anywhere in their car until you send them their money. No money, no starter.

Our sons purchased the Avenger second-hand for cash, but whomever owned this faithful white wonder before they did seems to have been in a long-term relationship with the bank. And they failed to mention that they were connected at the hip.

So, when my son drove through a puddle it sent the interrupter into a kafuffle. Its likely been trying to sort itself out ever since — happily disrupting the starter whenever the mood strikes. Dodge is disabling the device today and The Kid should have his car back by this afternoon.

Is your car interrupting your commute and your carefully plotted path to reaching your goals? ‘Ready to turn it in and get something a little more reliable? Choose the charity you love, and put that non-starter car to rest by donating through our program.

One thought on “Dodge |The Vengeful Avenger Strikes Again”