Carpool Karaoke as ride-along inspiration in the middle of hard working week? Take a few minutes to let Paul and James take the wheel. And how does Canada fare in public transit? Read on.

Carpool stats in Canada are strong. We may not have the happy company of a Corden, or a McCartney to speed our drive time. What we do have is some carpool grit! Canadians are quick to hoof it, or hop on their bicycles. We are eager to jump on the bus, or share a ride with a buddy. 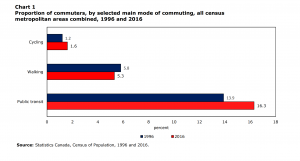 Big city dwellers are eager to walk, cycle, carpool, and use public transit. Toronto and Vancouver commuters are particularly keen on accessing all options. Montreal’s daily travelers trail behind in carpool practice, but are more likely to choose cycling as an option.

What about smaller centres?

If you’re one of the many Canadians taking advantage of cost-effective alternative, or public, transportation and find you have a car to donate as a result, we’d love to help! Just click here…