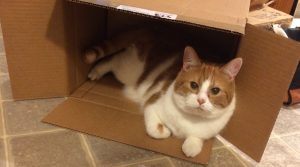 The MEOW Foundation is aided in their important work by your vehicle donations!

In the last 12 months, the MEOW Foundation has been the happy recipient of over $4000.00 in vehicle donations. Donate a Car Canada is working on their behalf to keep these donations purring along.

With a team of women committed to caring, many of the DAC staff are committed cat rescue themselves. Micky (the kitty you see above) has been the happy roommate of two of the Donate a Car Staff.

Of the ten staff working from DAC to raise vehicle donations for the MEOW Foundation, four are cat carers.

Just a few weeks old, Arthur was brought to me under less than ideal conditions. He was a tiny little thing that should not have been separated from his mother yet, never mind into a house with absolutely no cat experience, a Spaniel with strong hunting instincts, a snake large enough to eat him, and a rambunctious teenager. My mother found him while gardening at a race track, shortly after her boss had announced a kitten cull.

Arthur was found sitting in the middle of the communal cat food bowl. He was oblivious to his peers scrambling for cover as soon as a human approached. He was busy shoveling food into a mouth small enough that the few pieces of kibble he’d managed puffed his cheeks out like a chipmunk. Coming to crouch at the dish to get a closer look at him, my mother fell in love instantly. It slowly dawned on the little tabby that there was a presence that ought not to be there. He glanced warily from one side to another, looking for the backup of the other cats, only to realize he was alone. He shot her a defensive hiss, kibble cascading from his mouth during the effort. This did nothing to thwart her. She picked him up and brought him home in a box lined with her sweater.

I was 18 at the time, and we became fast companions. He was young enough to yearn for a mother figure. I was grieving the loss of another pet, a small boa constrictor called Shen.

A kitten in her pocket

Arthur-the-kitten and I bonded in those first few critical weeks. When the dog or  my 13 year old brother running about could injure or frighten him, I carried Arthur around in the pocket of my hoodie. His head peeked out as we went about the house.  He slept contentedly on a cushion in my bedroom closet, away from danger.

At a few months old he established himself with the dog, Meg. She earned a swift slap when she tried snapping at him. Animosity gave way to grudging respect and eventual friendship. When Meg passed on several years later, Arthur quickly became the alpha to the new dog, a Spaniel named Fionnegan.

Now 13, Arthur is still food-obsessed, quirky, and a wonderfully affectionate cat, quick with kisses and cuddles. He is still my constant companion.

When Arthur was 10 he began clinging to me when I came home from work. I decided that he could use a companion who was always home. Another cat. I had a plan going into the shelter: I would get an older cat that really needed a home. It would have a perfect personality for the dominant Arthur, yearning for affection and cuddles, but still active, and submissive. I went into shelters over the next several days and could not find the perfect fit. Wanting to give a chance to a cat that did not have much of one, I was unable to find one with all the traits I’d hoped for. Until I found Rumple.

Rumple was not at all what I expected. Instead of the older cat I’d envisioned, Rumple was a skinny, scared 3 month old kitten. He had been found in a trash heap with a small companion a bit older than him, and some deceased kittens that the rescue thought were from the same litter. I immediately fell in love with Rumple. Though he wasn’t what I expected, the rescue informed me that despite his age he was unlikely to be adopted. This was due to the trifecta of undesirable traits:

All of these were fine by me, and Rumple bonded with Arthur almost immediately when he came home. Due to his shy nature, he wasn’t too rambunctious for the older cat, but he was playful enough to keep Arthur’s interest. He was submissive to Arthur too, easing them into a fast friendship.

A little time and a lot of luv

It took two years of living with me, but Rumple finally learned to trust me as well. Three years in I can finally approach and pet him if I’d like. I can even groom him. Although he makes it clear it is under duress, he does not panic like he used to.

Though Rumple was seen as ‘undesirable’ and will never be as outgoing and friendly as Arthur, it makes each bit of progress with him so much more rewarding, and he is a wonderful addition to my family.

Are you interested in helping kittens and cats like Micky, Arthur, and Rumple? Reach out to the MEOW Foundation!